There is a Place called Nephi and I've Been There 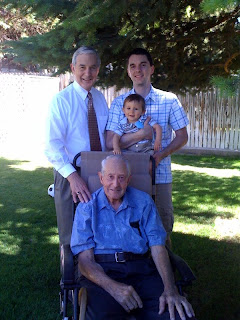 We made the hour and a half drive to Nephi today to see Grandpa June and Wendy. Grandpa June and Wendy are great. Wendy is opinionated and outspoken. She gives great big hugs and even lifted me off my feet today. I also found out that she always carries a weapon—kitchen knife, scissors, num-chucks. Yep that’s right num-chucks; apparently she is taking classes, but is skipping the Zen part. I totally feel inspired to be a num-chuck wielding senior citizen one day. Grandpa June is quiet and easy going. They are a nice balance to each other. We were able to get a 4 generation shot which is pretty special, especially considering Grandpa June will turn 92 December 24th.

Lola had a great time, mostly because Wendy let her do WHATEVER she wanted. She played in their sandbox, dumping sand in the grass, and then wiping her dirty hands on my clean shorts. Ryder also got to play in the sandbox, but it was rather short lived because he kept sampling the sand—and not just little bites, but big greedy mouthfuls. Lola saw chickens and wanted very much to play with them. She played soccer complete with sound effects. She laid on top of their dog (his name is Samara which is perfect for someone who studies the art of num-chucks). She found a water source and drenched herself. She made dog food stew (its easy you just dump their dry food in their water bowl). Best of all when we left all his mischievous action tired her out so she peacefully slumbered most of the way home.